Stories of Flight: Trauma and mental health among forcibly displaced and conflict-affected refugee populations in Uganda

“There are so many princes here” Doddy, a community health worker in Nakivale, relayed to me. We stood under a corrugated tin-roofed gazebo on the premises of Nakivale Health Centre Number III in Uganda. He points to a man standing across the dusty courtyard between the health centers wards. This man, a refugee who had lived in Nakivale for many years, was once the son of a powerful chief in the Congo. He had a privileged life by international standards with material wealth,  a high-quality private school education, trips to the United States as a child. Everything changed when his father died and a rival Congolese community group seized power. He lost all his material possessions and was forced to leave, fearing that conflict with the new community group would result in loss of his life, too. Though he has half siblings in the United States, he could not ask for their help. With no other social supports, his migration took him to Nakivale. After many years alone in the refugee camp, he turned to substance use for comfort. 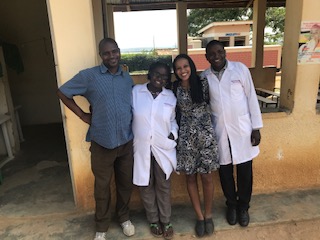 I had just met Doddy a few minutes before. He came to the health center with a kind-appearing couple that he brought for a medical check-up. They recently made it to Nakivale in the past year from the Democratic Republic of Congo. The couple were happily married and had eight children. They migrated to Nakivale to escape political violence. The husband had been kidnapped by a local rebel militia group and was taken to the group’s secluded base in the bush. He was forced into servitude and underwent disturbing physical and sexual violence. He managed to reunite with his family and they all fled the DRC together. He came to the clinic requesting HIV testing. He abstained from intimacy since reuniting with his wife due to fears that he had contracted HIV during his assault. He recounted each traumatic incident with complete composure and no betrayal of his emotion, speaking to the health worker calmly and politely. Next to him, his wife wept silently for him.

Doddy left for a home visit within the settlement. Soon after, a smiling, tall, dark-skinned Ethiopian walked up to greet me. He informed me that he worked as an Amharic translator at the health center. When I asked how he had come to Nakivale, he explained that he was born in Ethiopia and belonged to the Anuak Tribe. As an ethnic minority within Ethiopia, his tribe had endured persecution time and again through the booms and busts of civilizations in the region, serving as slaves during the Abyssinian Empire to freedom but second class citizenry under a brief period of British rule to de facto servitude after the Ethiopian government regained authority of the region. In the 1970s, when he was relatively young, both his parents were killed during a forcible eviction of his tribe from their land in the Gambella region of Ethiopia. He was able to flee to South Sudan with a few of his siblings. He lived in a refugee camp in South Sudan until four years ago when violence erupted between the South Sudanese government and anti-governmental rebels. During an escalation in the conflict, rebels opened fire at the refugee camp, killing a few refugees. He made a one month and ten day journey crossing the northern Ugandan border and traversing hundreds of miles to the southwestern region of the country to reach Nakivale settlement. He made the journey with one of his brothers. One of his children and few of his siblings stayed in South Sudan. Somewhere along the journey, through an experience that I was too reluctant to inquire about, he was separated from his daughter. He has been unable to contact or gather any information about her since he fled South Sudan.

Posted by Partners Center of Expertise in Global and Humanitarian Health at 12:59 PM