“Sexual Health of Migrant Women in Transit Through Mexico: What do they have to say about HIV/AIDS and Unwanted Pregnancy”

I’ve been here for almost 3 weeks. On the second day of the trip, I was surprised to find out that one of the shelters I was intended to work in, located close to Mexico City in a town called Huehuetoca, had to be closed down 3 days before my arrival for security reasons. A shooting happened inside the shelter, it’s still unclear if it was the Maras or the Zetas, I’m an amateur to the violence and cannot understand the difference, but a bullet is a bullet regardless its origin.


To set the context, Mexico is a country of origin, transit and destination for migrants. In 2010, according to estimates derived from Mexico’s National Migration System 140,000 Central Americans entered Mexico without documents. Migrants face a variety of human rights violations and are at risk for extortion, abduction, rape, murder and forced recruitment into criminal gangs. Based on the official numbers, women constitute around 15-20%, however an interesting piece of unofficial information that I’ve come across during this trip is that the percentage of women, decreases the further north you travel; it’s unclear why they disappear, how it happens or where they go. Regardless or as a reflection of the former, women are especially vulnerable facing serious risk of abuse and sexual violence by criminals, other migrants and corrupt public officials. Accurate figures regarding the magnitude of sexual violence in migrant women are inexistent nonetheless human right organizations estimate that 6 in 10 women and girls experience sexual violence during their journey. The long term goal of the project is to figure out a way to provide victims of sexual violence accessible, appropriate and impartial medical management. I’m currently on the initial phases, and the objective of this trip is to gather qualitative data regarding the problem by interviewing migrant women in shelters.

I haven´t had much luck finding women, the initial closure of the shelter and the increase in security checks have been an obstacle for the interviews. I spent some time visiting the parish in Huehuetoca, where I had to relinquish my Harvard student ID, in order to speak with the priest about the project. The reason for the visit was because the shelter (as most migrant shelters in Mexico) is run by the Catholic Church. The first thing I was told was “No cameras, no photos of migrants, it’s too dangerous”.  After the necessary introductions, I found myself talking about female/male condoms, post-exposure prophylaxis (PEP) etc., and I have to admit that listening to my voice as it echoed in the office of high ceilings made me wonder if what I was saying could be interpreted as sacrilegious. But he and his assistant listened, and when it came to their turn to speak, the panoply of necessities, intermingled with specific anecdotes to stress their point, came pouring out: strengthening security measures, legal assistance, medical care, prenatal care (any type of medical care!) were but a few of their requests. I reemphasized that I was there to gather qualitative data. They understood and now I’m waiting for the approval of the bishop to gain entrance to the shelter.
Serendipity led me to an exceptional man, who is not a priest, or a doctor, or a lawyer. He’s a simple man who in the 80s also became a migrant. He lived in the US and after saving enough money to build his house, returned to Mexico, his home-country. His town is close to the train tracks. The train, also known as “La Bestia” or “The Beast”, is one of the main modes of transportation because it’s free, and the railroad crosses the country from south to north. Migrants travel clandestinely on the train roofs. The journey can be tough, the lack of food and the changes in weather (cold in the mountainous regions, hot and humid in the tropics) are but two of the challenges they face in a daily basis. This exceptional man, that will remain nameless for now, understood this and for the last 12 years has been distributing plastic bags filled with bottles of water, oranges and bread. I witnessed his wife, daughters and grandsons prepping the bags, running to the tracks, signaling to let the rest know which train cars have people, and finally handing the bags to the migrants or throwing the bags into the train because most of the time the train will not stop and the bags need to reach their destination. At the end of that day, the exceptional man, smiled with his toothless smile and told me with pride that the cause of his missing teeth was not diabetes (which he has been diagnosed for a while but hasn´t received care for the last 2 years because of lack of money) but the multiple falls he’s suffered chasing “La Bestia”.

The lack of women to interview feels eerie but it has made me diversify.  I’ve been in contact with a small shelter in Mexico city (it only has 10 beds) and now I’m working on strengthening the alliances of it with a clinic in Mexico city which provides free care (including PPE for HIV when applicable) to victims of sexual violence. The clinic has agreed to manage migrants regardless of their migratory status in cases of sexual assault as long as they’re able to go to the clinic.

In addition, I’m working on establishing a network of local physicians that are available to the shelter for medical advice. Some days, things seem slow and unattainable, and I’m inclined to think that migrants are unreachable but I remember the words I just heard a few days ago: “People like to call them invisible, but I don’t think it’s accurate, I see them every day on the tracks.” 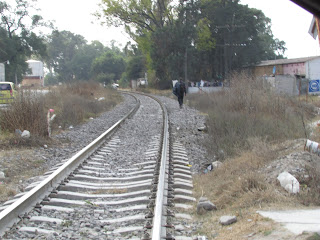 Posted by Partners Center of Expertise in Global and Humanitarian Health at 1:20 AM No comments:

My time in Liberia has come to an end and I am just returning to Boston from 5 weeks at JFK Hospital in Monrovia. 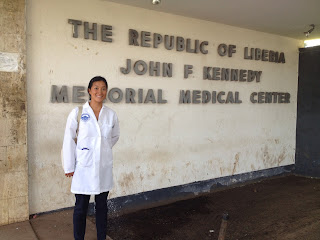 Though time moved quite slowly there, I was able to accomplish my goal, which was to further develop the relationship between the JFK Surgical Department with Harvard Medical School's Program in Global Surgery and Social Change (PGSSC).  We accomplished this through a combination of educational initiatives, research infrastructure development, and clinical work.

From an educational perspective, I gave plenty of lectures to the medical students about all sorts of surgical topics.  I was even at JFK when the Department of Surgery was giving hospital-wide Grand Rounds, and, along with two of their surgical house officers, presented gastric ulcer disease: 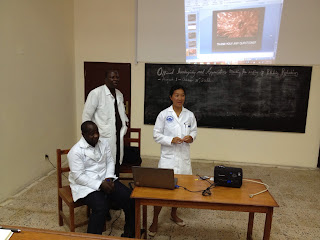 From a clinical perspective, I was joined by my PGSSC colleague, clinical fellow Dr. Rowan Gillies, for a week at the end of my stay.  I was fortunate to join him for a couple of operations while the other local surgical house officers were busy.  Rowan, a Plastic Surgeon, has plenty of experience having been a former International Council President of the Nobel-Prize Winning Médecins Sans Frontières, so it was a real pleasure to get to work with him clinically! 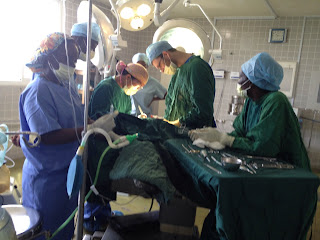 I made terrific friends out of the colleagues I met in Liberia.  In fact, one of the scrub nurses had actually worked with me before -- in 2008, when I was a medical student visiting Liberia from Mount Sinai Medical School!  In addition, there was even a scrub tech wearing scrubs that he had received from from Mount Sinai surgeons!  It is a small world. 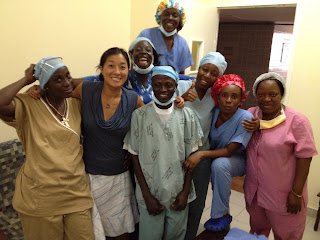 While it was bittersweet to say farewell to JFK Hospital and Liberia, I look forward to returning -- hopefully, this spring!  We have research collaborations that are ongoing, and I plan to return with another one of the PGSSC clinical fellows as well.  I imagine that the cold New England winter will have me dreaming of the Liberian beaches!
Posted by Partners Center of Expertise in Global and Humanitarian Health at 5:34 PM No comments:

Tiffany Chao, MD, MPH  General Surgery Resident
Massachusetts General Hospital
Paul Farmer Global Surgery Research Fellow
Program in Global Surgery and Social Change  Harvard Medical School / Children's Hospital Boston
JFK Medical Center
Monrovia, Liberia
Ever since I visited Liberia in 2008 on a surgical trip with my medical school, I have wanted to return to this country.  Liberia, a small West African nation approximately the size of the US state of Virginia with a population of 3.5 million, at once demonstrates real health care capacity needs and the potential for considerable progress. A post-conflict nation recovering from a devastating 14-year civil war (1989–2003), Liberia is in the midst of critical period of stabilization.  Studies have begun to address the longstanding dearth of data regarding Liberian surgical capacity, and  the burden of specific disease entities and evaluation of particular interventions through outcomes monitoring are also of particular interest.


This year, I had the opportunity to work with Harvard Medical School's Program in Global Surgery and Social Change (PGSSC) as a research fellow, and I was extremely lucky that our program works in Liberia in addition to Partners in Health sites in Haiti and Rwanda.  Because of this, I have been able to come to Liberia for five weeks in October and November in order to teach medical students, contribute to clinical care, and develop research projects in conjunction with the local surgeons at JFK Medical Center, which is the country's only tertiary care hospital. 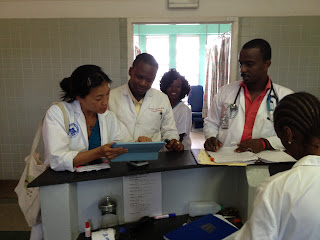 Here is a photo of me teaching medical students before rounds. My iPad has proven to be quite handy for this!

The current research project that I am working on with the entire surgical department involves developing a fundamental knowledge base about surgical demographics and operative capacity through a comprehensive operative log review and analysis at JFK Medical Center during 2009-2012. This data will guide the development of surgical capacity at the primary medical institution in the country in an epidemiologically-based and patient-centered way that can hopefully be replicated throughout the country. Once established, this knowledgebase can be used to focus direction of limited resources to provide high-quality care, improve efficiency and guide development of residency programs in the most crucial clinical areas.

I have already been in this country for two weeks, and it is remarkable how much the infrastructure has advanced since 2008.  Back then, we had blackouts nearly every day and were often forced to operate in the dark with headlights.  Today, that would be unlikely, and the only time we ever lost power was in our dorms, at night, during a particularly bad storm.  That is progress!
Of course, there are still significant resource limitations here, as in all developing countries. 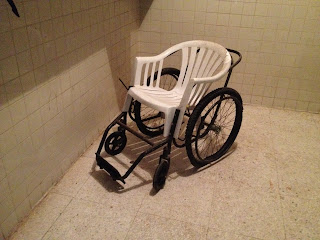 Here is a picture of a "wheelchair."

In particular, surgical capacity in Liberia is limited by human resources--in addition to the extremely limited numbers of physicians in this country, there are only four fully-trained surgeons working in this entire country, and only two of them operate full-time.  The good news is that there are plenty of medical students in the pipeline.  As you can imagine, I have been trying to encourage the medical students to go into the field of surgery!
Posted by Partners Center of Expertise in Global and Humanitarian Health at 6:24 PM No comments: