Over half of my time here collecting qualitative data has passed, and
we are finishing up our interviews this week. Spending time in this
area has given me an appreciation for the realities of rural life in
India (and a healthy appreciation for bug spray!). The villages here
are quite remote, separated by tracts of thick forest. These areas are
dotted with Primary Health Centers, where medical officers and nurses
are staffed. However, these centers are supposed to serve villages
located over 20 kilometers away, and the vast majority of villagers do
not own a motorized vehicle. Transport is accomplished by walking,
bicycle, hitching a ride on a bullock cart, or by public bus (which
I’m told exists, but I’ve never seen). This is the same hurdle faced
by community health workers, trained by the government to do active
surveillance for fever and test for malaria. These workers are meant
to monitor a population of 3,000 people on a weekly basis, but when
villages are as small as 60-75 people, this responsibility can
translate into a heavy travel burden, particularly in the absence of
mechanized transportation. The community health workers told me they
often walk between villages, which is actually quite dangerous as the
forests are full of poisonous snakes. In fact, there have been 12
poisonous snakes found in my camp in the past 16 days. Not
surprisingly, snake bite is a common (and potentially fatal) health
hazard in this region. 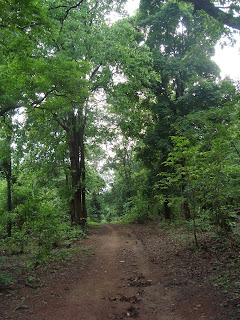 The landscape here is really serene and beautiful, with thick green
forest dotted with small villages and rice paddies. It’s the most
peaceful part of India I’ve ever seen.


Posted by Partners Center of Expertise in Global and Humanitarian Health at 8:06 AM No comments:


Malarial infection is a major public health concern, thought to cause approximately 3000 deaths worldwide per day, with the severest consequences of morbidity and mortality bourn by the world’s poor and most vulnerable populations. Within India, the World Health Organization reported 1.5 million confirmed cases of malaria in 2009, with the highest number of malarial deaths outside of the African continent. A recent Lancet study estimating approximately 200,000 deaths annually from malaria, with the overwhelming majority of these deaths occurring in rural areas (>90%) and not associated with a formal healthcare facility. WHO South-East Asia Regional Office (SEARO) report in 2007 notes the incidence of malaria is almost doubled in rural areas, as compared to urban settings (135 versus 73/100,000, respectively).

My project is aimed at developing a better understanding of the persistently high rates of Plasmodium falciparum malaria among tribal populations in Gadchiroli District, in Eastern Maharashtra. This district had over 13,000 cases of confirmed malaria in 2011 (approximately 70% are P falciparum). The region is rural and heavily forested, with a population composed of nearly 50% tribal members. Tribal people represent approximately 8% of the total population, and represent over 17% of the rural poor nationally. They are considered members of "scheduled castes" or "scheduled tribes", and have been described by the National Vector Bourne Disease Control Programme (NVBDCP) as "groups of people with social, cultural, economic, and/or political traditions and institutions distinct from the mainstream or dominant society that disadvantage them in the development process". My current research will gather qualitative data from groups that represent various factors involved in the use of, delivery of, and compliance with adequate malaria prophylaxis and treatment. Data is being gathered through focus group discussions (FDGs) as well as interviews with a few key informants. This research is being conducted in a partnership with the NGO SEARCH (http://www.searchgadchiroli.org/)

I completed 10 days in the field, and have travelled throughout the district to visit tribal villages and primary health centers (PHC), staffed by allopathic practitioners. We have done 4 FDGs with tribal men and women, as well as one with Auxiliary Nurses and Midwives (ANM) and one with Multi Purpose Workers (MPW). The latter two groups are government-trained community health workers, whose task is to do active surveillance in villages for fever cases, POC testing (with rapid diagnostic kits), take blood smear for definitive testing, and begin presumptive treatment while blood smear results are pending. I've also done interviews with medical officers in charge of the primary health centers, district health officer and district malaria officer (appointed by the NVBDCP). All these lines of data are aimed towards developing better understanding the barriers to adequate malaria prophylaxis, screening and treatment among tribal communities in Gadchiroli. Most interviews are being done in Gondi (the local tribal language) or Marathi, with the assistance of a translator. So far, we have learned that - at the village level - fever cases are often self-referred to a traditional healer (Pujari) within the village. When herbal remedies are not effective for fever, the villagers often go to a nearby town where there is a "Bengali Doctor" (not an allopathic practitioner, actually referred to as "quack doctors" by medical officers in India) for "injection and saline" treatment. These treatments are sought primarily because they appear to relieve the symptoms of fever, but obviously does not treat the underlying problem of potential malaria. While tribal people appear to have basic knowledge about malaria as a potentially severe illness, this knowledge does not translate to practice. While distance is often a limiting factor in visiting PHCs (hence the important role of ANM and MPW in rural health), cost is not as much of a factor. The PHC provides services for only 2 Rupees (about 4 cents) and all medications are provided free of charge. In contrast, the cost of treatment by a Pujari or Bengali Doctor is on the order to 100-200 Rupees.

We have more focus groups scheduled for the coming weeks, and hope to gather more data to better understand the process of treatment-seeking in these communities. In the meantime, my research assistant and I are working on making transcripts and staying dry in the midst of heavy monsoons.

Posted by Partners Center of Expertise in Global and Humanitarian Health at 7:33 AM 2 comments: