The primary purpose of my visit to the Neurology Ward at Muhimbili National Hospital (MNH) in Dar es Salaam, Tanzania was to enroll patients in a trial examining disability and mortality after stroke. In addition, I wanted to spend time with the team clinically for the added exposure and also think about interventions that could improve the care of this patient population. MNH was established as the Sewahaji Hospital in ~1910 and is the largest referral hospital and academic teaching hospital in Tanzania. There are >1500 inpatient beds. Each week, 1000-1200 patients are admitted to the inpatient services and 1000-1200 outpatients are seen. There is one male and one female neurology unit.

Throughout my time rounding with the team, there were several system limitations that I came across. Most of these limitations stemmed from a relative lack of funding compared to hospitals such as MGH and BWH. Unfortunately, these limitations existed from pre-hospital care to care after discharge.

In the USA, patients with acute stroke are treated with tPA if they arrive at a hospital within a 4.5 hour window in many cases. In addition to tPA, several trials in 2015 showed the very significant benefit of endovascular thrombectomy. During my 3 weeks rounding at MNH, I did not care for a single patient that received tPA. While I was told the hospital had tPA available, they almost never are able to use it as patients usually arrived well outside of the time window. One of the senior clinicians asked me how often we send patients for endovascular thrombectomy at MGH and BWH. He said he didn’t think he’d see this intervention come to east Africa in his lifetime.

After admission, the work-up of some patients is limited by insurance. Few patients complete vessel imaging (which can alter care by determining eligibility for carotid endarterectomy) and some patients are unable to complete MRI (to make sure the lesion is truly a stroke and not something else such as tumor). Furthermore, there is no telemetry on the wards to monitor for atrial fibrillation and no heart monitors are available for 30 day monitoring after discharge (to consider anticoagulation). After discahrge, there are no acute rehab facilities, so patients must go home with the care of their families and return for outpatient PT and rehabilitation.

Learning about these differences really made me appreciate the embarrassment of riches that we have here at MGH and BWH. I think the next steps will be discussing these system issues to prioritize them based on the need and feasibility of interventions. Then, the most cost effective interventions should be implemented to improve care.

Posted by Partners Center of Expertise in Global and Humanitarian Health at 9:38 AM 3 comments:

Neurology teaching ward in urban Tanzania
My first day of rounding on the Neurology Ward at Muhimbili National Hospital (MNH) in Dar es Salaam, Tanzania was a unique and life changing experience. MNH was established as the Sewahaji Hospital in ~1910 and is the largest referral hospital and academic teaching hospital in Tanzania. There are >1500 inpatient beds. Each week, 1000-1200 patients are admitted to the inpatient services and 1000-1200 outpatients are seen. There is one male and one female neurology unit. While the physical appearance was quite different compared to MGH and BWH, I was surprised at many of the similarities in terms of the teaching culture.

As I approached MNH during the walk from my lodging, it was clear that the hospital lacked the surplus of funding that hospitals such as MGH and BWH have. Many of the wards are connected by dirt roads. There was only air conditioning available in one building, the Cardiology Ward, which had just received a large donation to be built. As I entered the Neurology Ward, I noticed that paint was peeling off of the walls, the windows were all open allowing some bugs entry into the building, there were mosquito nets hanging over the patients, and 15-20 patients were placed in one common space. On a few occasions there was a lack of running water on the wards, and jugs of water were brought in so we could wash our hands.

Despite the relative lack of resources compared to MGH/BWH, I was surprised at the many similarities. It was clear the house staff really cared for the patients. Many of the same services we offer patients at MGH and BWH were available at MNH in scaled down versions. I was perhaps most surprised by the structure of rounds. In the same fashion at MGH/BWH, the most junior person, usually the rotating intern, presented the patient. He or she was “pimped” to assess knowledge and give feedback. There was a similar hierarchy, where sometimes the most senior staff would even make fun of junior trainees. “Weren’t you previously a student of mine before you graduated to intern?” asked one of the senior clinicians to an intern. “You were a lot better back then!” the senior clinician joked. I was surprised that this same social dynamic exists on the other side of the world. I suppose fear of public embarrassment is a strong motivator for studying more and perfecting your clinical skills. While there was a hierarchy, it was clear that everyone wanted to learn and care for the patients as best as possible.

Posted by Partners Center of Expertise in Global and Humanitarian Health at 9:33 AM 4 comments: 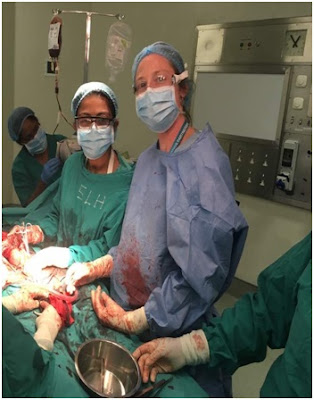 As a third year OB/GYN resident, teaching is an important part of my job. Initially, much of it was clinical knowledge and management but as time has gone on and my own skills have developed, it has also been teaching procedures and surgical techniques. In the US, however, we have the luxury of having attendings closely observing and supervising in every case, big or small. In Botswana, interns and medical officers do not always, or even often, have this benefit. Scottish Livingstone Hospital (SLH) is a 200-bed facility in Molepolole, about 60 km from the capital Gabarone. There are 4 hospital departments: Medicine, Pediatrics, OB/GYN, and Surgery. Each department has 1-2 attendings. Teaching is a primary goal for all of the attending physicians but, given clinical demands and number of trainees, always having one on one training, as I often enjoy in my clinics or surgeries, is not possible. Moreover, it could be argued that for an attending to watch over a medical officer’s each and every clinical or surgical decision would not be in that medical officer’s best interest as medical officers take call overnight by themselves, covering all of OB/GYN and doing whatever needs to be done, though with attending physicians available for by phone and for in person assistance in case of emergency. Medical officers must, therefore, quickly gain confidence in their skills and decision making, knowing that help is, though available, certainly not in the building.

In this setting, one of the main ways I felt like I could contribute at SLH was by teaching the interns and medical officers. During my second week at the hospital, one of the medical officers approached me after hearing about a woman with a first trimester missed abortion who needed to undergo a dilation and evacuation. While she was not assigned to the unit taking care of this patient, the medical officer had done an evacuation the prior week that was unsuccessful and thus had been on the lookout for more so she could get better. I happily agreed and we together took the patient to the operating room.

While it was a minor procedure, this was the first time I had taught it without the reassuring presence of an attending behind me, adding an extra little tip here and there and, more importantly, providing me with the comfort that help was at hand should anything go awry. Thankfully, though, it did not. I talked the medical officer through the procedure, trying to strike the balance between guiding her through it while still allowing her to do the procedure and gain confidence and making sure the patient was safe that my teachers had seemed to do so easily. She did great and so did the patient.

The next week the medical officer found me after morning report. She had been on call that past weekend and a patient had come in bleeding with an incomplete abortion. The medical officer had taken the patient to the OR herself, completed the evacuation and the patient had gone home, her bleeding resolved.
Posted by Partners Center of Expertise in Global and Humanitarian Health at 2:39 PM 3 comments: